Mark your calendars (hopefully one of our new Nevada Geology calendars)! 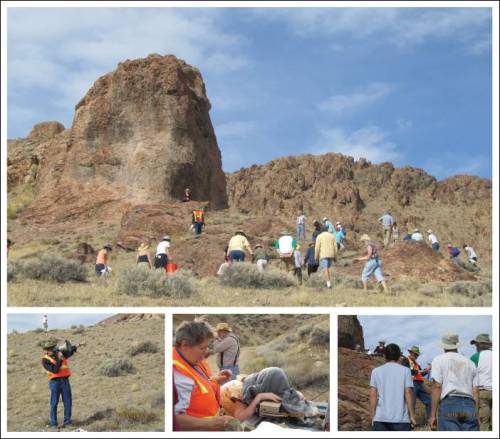 A limited supply will be printed, but you can purchase your calendars now:
http://www.nbmg.unr.edu/sales/pbsdtls.php?sku=CAL2013 Buy 10 or more calendars, and you will receive a 41% or greater discount.
Discount Schedule for the General Public:
http://www.nbmg.unr.edu/sales/discount_schedule_general_public.pdf
If you place an order for 10 or more calendars, the shopping cart will complete your order showing the regular price. That is OK. When we process the order, we will reduce your total to reflect the discounted price before we submit the charge to VeriSign/PayPal. You will only be charged the discounted amount. If you already placed an order for a calendar, we will mail those orders next week. If you reserved a calendar for pick up, they are now available at Great Basin Science Sample and Records Library (2175 Raggio Parkway, Reno). http://www.nbmg.unr.edu/Departments/GBSSRL/docs/GBSSRL_map_directions.pdf
While you are at GBSSRL, please be sure to check out our new rock garden in the back.

Kids of all ages: come by and pick something pretty from our new rock garden! Geologists: please feel free to take something or leave something. Thanks!http://www.nbmg.unr.edu/GeneralGeology/RockGarden.htmlWe thank Jon Price, Craig dePolo, and Dav…

Kids of all ages: come by and pick something pretty from our new rock garden!
Geologists: please feel free to take something or leave something. Thanks!

We thank Jon Price, Craig dePolo, and David Davis for planting the seeds—and we will all watch the garden grow.

Modern space geodesy has recently enabled the direct observation of slow geological processes that move and shape Earth’s surface, including plate tectonics and crustal strain accumulation that leads to earthquakes. More elusive has been the direct observation of active mountain growth, because GPS measurements have larger uncertainties in the vertical direction and mountain growth is typically very slow. The latest research using high-precision technologies indicates a relatively high vertical uplift rate for the Sierra Nevada, between 1 and 2 mm/yr. Thus the modern Sierra Nevada uplift is still very active and consistent with theories that call for a relatively young mountain range.

Presenter Bill Hammond is an Associate Professor at the University of Nevada, Reno, where he studies active deformation and dynamics of the Earth using space-based geodetic techniques. He works in the Nevada Geodetic Laboratory, which is a part of the Nevada Bureau of Mines and Geology in the University’s College of Science. His previous employment includes 4 years at the U.S. Geological Survey in Menlo Park, CA. He earned his Bachelor’s degree in mathematics at U.C. Berkeley and his Ph.D. in geophysics at the University of Oregon, Eugene. He and his family enjoy the Sierra Nevada scenery while living in Truckee, CA. Find more information about Bill, links to publications, courses, at http://geodesy.unr.edu/billhammond.php.

An announcement from Laura Ruud at GSN: “The Southern Nevada Chapter is foregoing their normal meeting time in September to be able to have a joint meeting with the AEG in Las Vegas in early October. The speaker will be Jim Faulds, the new NBMG Di…

An announcement from Laura Ruud at GSN:

“The Southern Nevada Chapter is foregoing their normal meeting time in September to be able to have a joint meeting with the AEG in Las Vegas in early October.  The speaker will be Jim Faulds, the new NBMG Director and State Geologist.  Details of that will be in the October newsletter.”

Title: A magmatic-hydrothermal model for Carlin-type gold deposits
Speakers:
Adam Simon: University of Michigan
John Muntean: University of Nevada Reno (NBMG)
Jean Cline: University of Nevada Las Vegas Geologists continue to debate the origin of Carlin-type gold deposits. Several geologically plausible hypotheses have been proposed ranging from magmatic-hydrothermal, to metamorphic, to connate, to deeply circulating meteoric fluid. In this talk, I will present new and published data that are consistent with a magmatic-hydrothermal model for the origin of CTGDs. These data include: 1) a spatial and temporal association between CTGDs and magmatism, both within individual deposits and at mid-crustal levels; 2) high-resolution electron microprobe traverses of ore-stage pyrite that demonstrate the nearly ubiquitous presence of a suite of magmatically-incompatible trace elements (As-Hg-Tl-Te-Sb) in gold-rich pyrite growth zones; 3) partitioning data from experiments and natural fluid inclusions that demonstrate the ability of magmatic aqueous fluid(s) to scavenge Au and incompatible trace elements (As-Hg-Tl-Te-Sb) and transport them into the upper crust; 4) the presence of ~0% sulfur isotope values in ore stage, gold-bearing pyrite growth zones; and, 5) O and H isotope data in ore-stage fluid inclusions that are consistent with magmatic aqueous fluid. The formative model involves: 1) degassing of the Farallon ocean plate and hydration of the overlying mantle wedge and sub-continental lithospheric mantle (SCLM); 2) the ascent of early aqueous fluids with a low Au/Cu ratio, resulting in restite having a high Au/Cu ratio and enrichment of the SCLM in As-Hg-Tl-Te-Sb; 3) flattening of the slab followed by slab detachment resulting in asthenospheric upwelling and the generation of large-scale basaltic magma at the base of the SCLM; 4) mixing, assimilation and homogenization of asthenospheric magma with the base of the crust; 5) ascent of this hydrous, fertile, Au-rich magma along deep faults that were reactivated during Basin and Range extension; 6) ponding of Au-rich, As-Hg-Tl-Te-Sb-bearing magmas at depths of ~10 km, consistent with gravity and resistivity studies; 7) degassing of the silicate melt and evolution and ascent of Au-rich, As-Hg-Tl-Te-Sb-bearing aqueous fluid; 8) vapor contraction, brine condensation and loss of Fe from the ascending aqueous fluid; 9) acidification of the aqueous fluid owing to dissociation of carbonic acid resulting in permeability enhancement of carbonate host rocks; 10) assimilation of downwelling meteoric fluid resulting in mixed H-, O- and S-isotope signatures in many deposits; 11) sulfidation of iron in the carbonate host rocks and concomitant reaction with S in the aqueous fluid to precipitate pyrite, destabilizing Au-chloride and Au-sulfide complexes and precipitating gold along with As-Hg-Tl-Te-Sb; and 12) continued ingress of meteoric water resulting in precipitation of post-ore orpiment, realgar, and stibnite. The geologically plausible model is consistent with all salient characteristics of CTGDs.